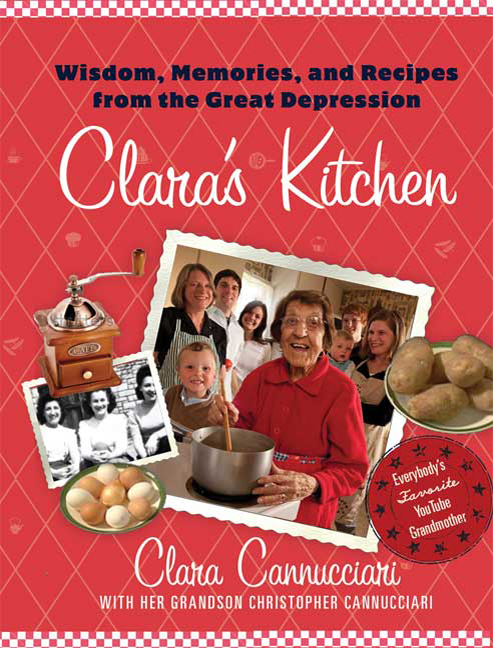 A while back I wrote about my definition of the la cucina povera or the kitchen of the poor.  I view la cucina povera as a style of cooking centered on cooking with whatever, non bourgeois, ingredients are in the house.  My family in Calabria once cooked in the above manner (mostly due to economic reasons but also because what was “in the house” included the farm and items like milk and cheese, olives, vegetables, wheat, some meat, some cured meats, beans, and some fish).  And la cucina povera of early to mid twentieth century Calabria is probably closer to today’s haute cuisine than the poorman’s food everyone associates with peasant cooking.

Enter Clara’s Kitchen, the cookbook by Calogera Bonfani Cannucciari (or Clara Cannucciari for short) whose sole focus is on sharing depression era Italian American recipes and stories.  Clara was a teenager living in Chicago with her Italian American family during the Great Depression and recounts her parent’s journey from Palermo Sicilia, her family’s struggle to earn money, and ultimately how the family was able to survive during one of the most difficult economic periods in US history.
Clara’s book is comprised of six chapters including:
(video: book trailer and teaser staring Clara!)
You’ll find some recipes in Clara’s book that you’ll immediately recognize including swiss chard with garlic, eggplant parmesan (made not with Parmiggiano Reggiano but Pecorino Romano), dandelion salad, “Sunday bread”, minestrone, fried smelts, and sponge cake – all Italian American staples.  The recipes are simple, straightforward, economical to prepare, and are often substantiated with a story or two!
I didn’t think I’d enjoy Clara’s Kitchen when I received a copy in the mail (afterall, my experience with la cucina povera wasn’t the same as Clara’s) but I quickly began to appreciate that Clara and her family cooked no differently than any person making Italian food in America; that is to say, they adapted available ingredients into their modified version of Italian food.  And for this I salute Clara and say, “Bravo!”