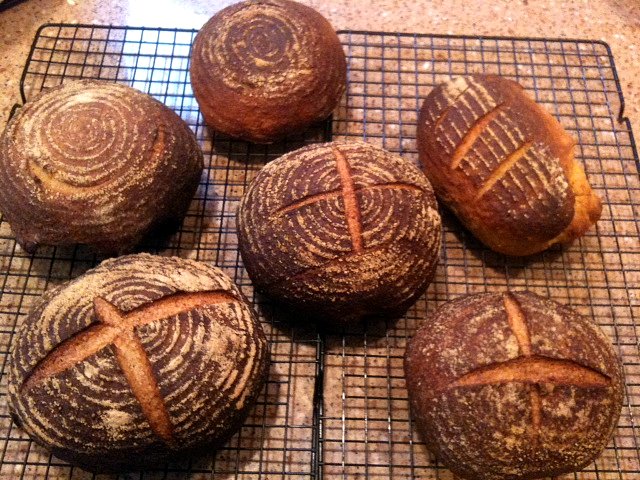 Dr. K.’s Bread Baking and Some Detail Behind the Recipe

It’s been a while since we featured a guest post from our good friend Dr. K who’s wowed us in the past with bread recipes such as Whole Wheat Pita and Coccodrillo Ciabatta.  In turn, we’re delighted to present the following 100% whole wheat Sicilian sourdough bread recipe from the good Doctor (see all of his outstanding guest posts here).  Note, the bread recipe is similar to Dr. K.’s method for making Le Pagnotte di Enna or Loaves of Enna (i.e., they both have durum wheat in common) but it is not the same recipe.  For example, the Loaves of Enna recipe uses a biga, which is a starter made by combining commercial yeast with flour and water and letting it sit for a certain period of time.  It also is a very lean dough with just flour, water, yeast and salt, nothing else.

For the sourdough recipe, Dr. K. used a starter (mother) maintained with regular feedings.  It is composed of a symbiotic culture of wild yeast and bacteria which ferment and acidify,as well as leaven the dough.  The one he uses has been around since the 1840s, which he then converted to 100% whole wheat, and then for this recipe he converted it to near 100% durum whole wheat.  But there is no commercial yeast in this bread.  The loaves are also modestly enriched, with added olive oil and honey, as well as whey that he used in place of water.  The additions give the bread more complexity, sweetness, and tang. 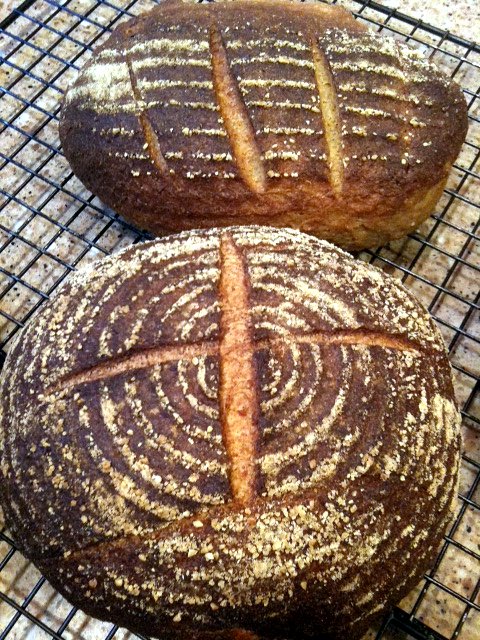 Dr. K.’s recipe is adopted from the excellent bread baking site, sourdoughhome.com; specifically, their 100% whole wheat sourdough bread recipe.
Dr. K tripled the recipe and instead of the loaf pans, he proofed the
dough for the third and final rise in brotforms/bannetons, and slashed
the loaves before baking.

For this last iteration, he converted some of the whole wheat starter to a 100% whole wheat
Durum
wheat starter and used only freshly milled durum wheat for baking.
Hence the moniker of “Sicilian sourdough.” The bread is great tasting
and a beautiful yellow crumb.

He also used whey (from cheese making) instead of water, as the bread benefits from an extra lift and tang.

Finally,
Dr. K does the baking a bit differently. Specifically,  he cranks the
oven to 500 for a half hour with a cast iron pan filled with river
stones. Then, right after he puts the loaves in, he throws a dozen ice
cubes into the cast iron pan, which is on the rack below the rack
contain the loaves, which he put on parchment paper over baking stones.
This creates a great deal of steam which nicely browns the crust and
gives a good oven spring.  When he puts the loaves in he turns the oven
down to 450 degrees Fahrenheit, and turns it down to 400 degrees
Fahrenheit after fifteen minutes. After 20-25 minutes, he checks the
loaves and cover them with foil if they’re getting too brown.  After a
half hour, he starts checking the internal temperature and removes the
loaves when they hit 190 degrees Fahrenheit.