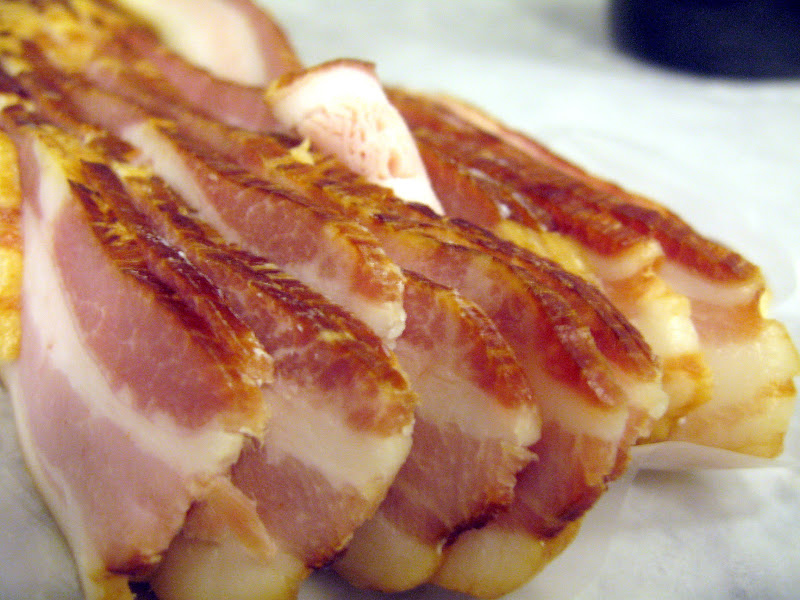 (photo: locally produced bacon from a nearby butcher)
By now, you’ve read my countless references to salame, prosciutto, capicola, cured pork, etc. and you may be thinking: what’s wrong with this guy, does he have a thing for pigs or something?   The short answer is yes and the pork obsession is centered on the cured kind – that salty and spicy perfection that is, in my view, the ideal epicurean representation of the pig.
I trace my addiction, like many of my culinary discoveries, to my childhood summer vacations in Calabria.  Specifically, the special piece of farmland near the village of Pellegrina where Nonno Latella (my mother’s father) grew wheat, harvested olives, and raised animals.  Nonno’s farm housed cows, oxen, goats, chickens, rabbits, and pigs; yet the hogs were the noblemen of the farm often receiving choice scraps of food from our lazy family lunches as well as not requiring to work as hard as, say, the oxen or cows. 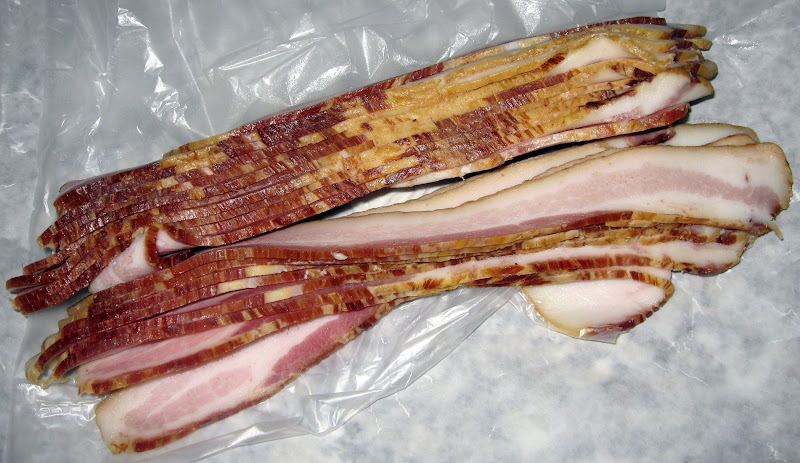 The pigs led the good life because they were being prepared for slaughter and, amongst other things, the curing process which yielded both whole muscle cured meats (such as capicola and salt pork) and salami (such as cacciatore and soppressata); collectively known as salumi.  Nonno Latella produced cured pork only for his immediate family and the lucky few whom he befriended outside the Latella clan.  His yearly production fluctuated in terms of both quantity and type.  We would often be treated to capicola and cacciatore and on occasion lardo (made from the back fat of a pig), salt pork, and pancetta.  My favorites were capicola and lardo, but I was particular fascinated with pancetta because of it’s unique appearance (it’s white fat with a streak of red running through the end product) and what part of the animal it derived from; namely, the belly.

Pancetta, the diminutive of pancia meaning, as mentioned above, belly, is often mis-identified as “Italian bacon.”  While pancetta is salt cured and spiced it is usually not smoked like typical breakfast bacon.  Bacon and pancetta have a similar appearance and both cured meats originate from the belly of the pig, however pancetta is spiced more aggressively including pepper, cloves, red hot pepper, garlic, nutmeg, fennel, etc.  Pancetta is also aged for about 3 months versus about 8 days for standard bacon.  Pancetta can be served on it’s own (sliced very thin), but it’s often used a base for sauces and as a cooking fat (when rendered) for many pasta condiments (Guanciale is yet another type of Italian cured pork product <made from the jowel or cheeks> that is also used when making pasta sauces). 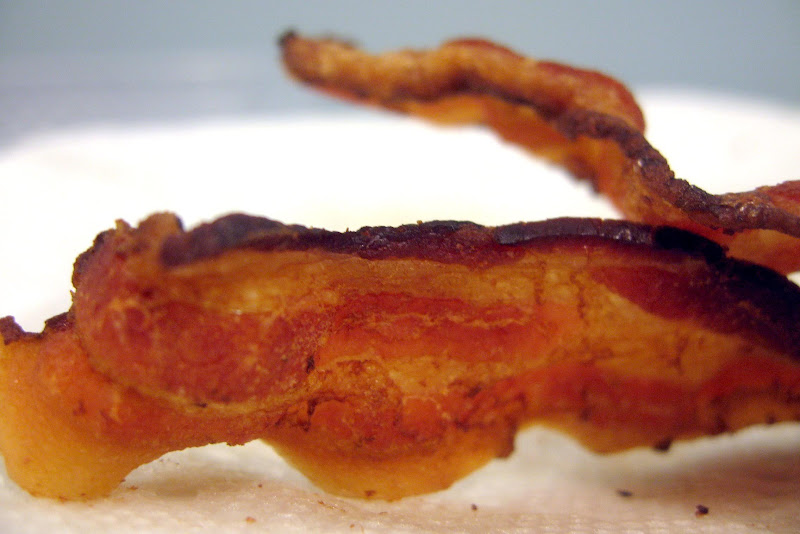 So, while I would never refuse any expertly crafted cured pork (mass produced cured pork is vile and shouldn’t be consumed <period>; always, always look for cured pork products made from heritage breeds via small farms where the pigs are allowed to roam on a pasture, eat well (like Nonno’s pigs), and generally lead a happy a life – tasting hormones and chemicals in fat, for example, isn’t my idea of eating well) I particular enjoy, like everyone else, well made bacon.  In fact, a well made homemade bacon, with smokey and salty notes, beats pancetta in my view (shh, don’t tell nonno!). 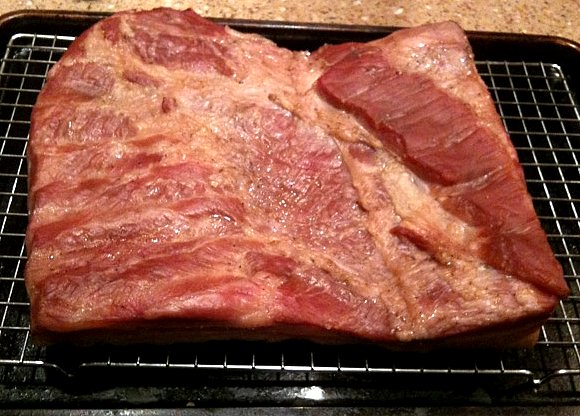 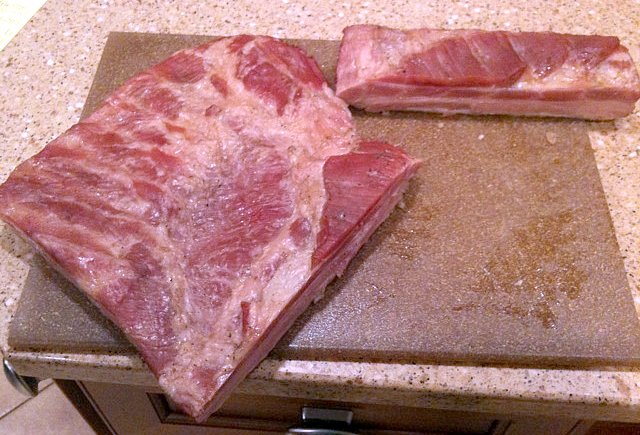 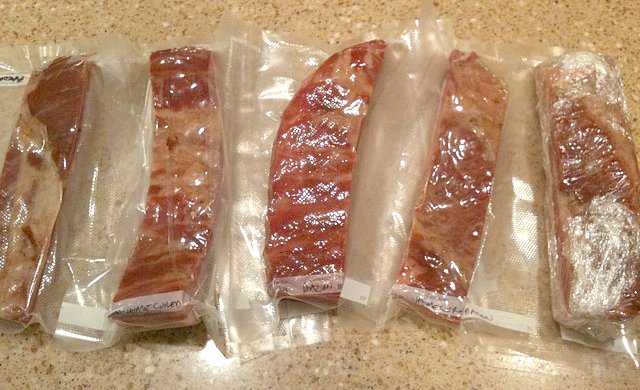 The three pictures above are all courtesy of our super fan, Dr. K.  Dr. K. used Ruhlman’s recipe to make his own bacon at home. 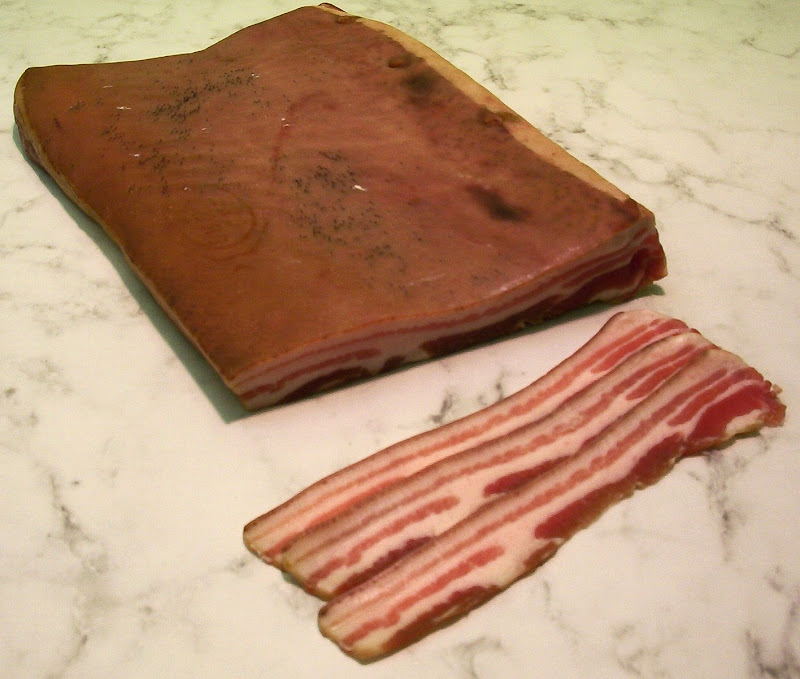 (photo: courtesy of Clancys from the UK.  Notice how similar pancetta looks to bacon)