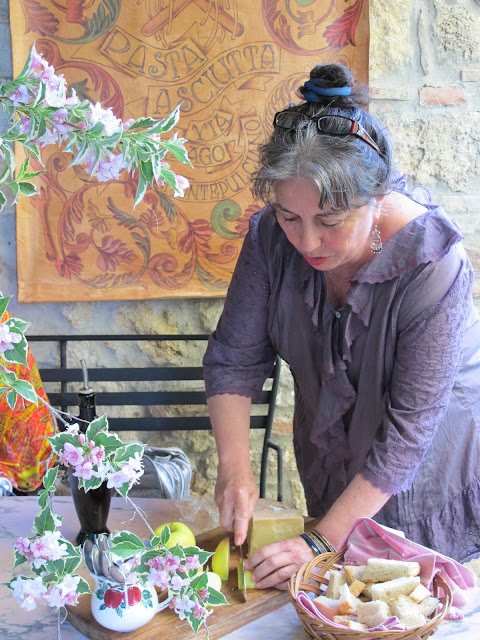 If you were to tell people that Italy and America have a few things in common you’d most likely receive some awkward stares.  After all, America is a country driven by capitalism and rationality while Italy operates under a lifestyle driven worldview with importance placed on living well and understanding the subtleties of day to day existence (at least outside of large cities like Milan, Rome, and Turin!).

With the above in mind, Pamela Sheldon Johns reminds us that there may, in fact, be some similarities in how we live in both the United States and Italy.  Pamela, through her new cookbook Cucina Povera – Tuscan Peasant Cooking, recounts her mother’s days on a Midwest farm during the Great Depression, using everything around her and not wasting a single fruit or leftover.  Pam also describes the same tendencies in Tuscan women, having moved to to Tuscany to establish culinary workshops and write countless cookbooks.  So, maybe there’s more in common between the two countries than we think!
Cucina Povera is a simple book (in a good way) and from a purely aesthetic perspective does a wonderful job echoing the theme of the kitchen of the poor; namely, and this is my definition:
a style of cooking best represented, in the past, by the lower class (read: peasants) of a given society.  Peasant cooking aims to utilize whatever is found in the kitchen, household, farm, etc. to prepare meals.  The concept of cucina povera can be found in every society and is about making great food with simple, yet high quality, and available ingredients
Sheldon Johns’ book includes sections on appetizers, soups, pasta and grains, side dishes, etc. and the table of contents is arranged in a traditional format more for the benefit of the reader than an actual representation of how folks eating in the style of Cucina Povera would dine (i.e., the poor do not eat multi course meals, at least not the poor people I know).
Some of my favorite recipes include the simple acknowledgement of sliced cured meats as an affettati or appetizer given the lack of refrigeration and need for protein during more difficult times.  I also enjoyed the recipes for fried anchovies , pasta al forno, and freshwater fish stew.
Cucina Povera also includes some of the best original photos I’ve seen in a cookbook (kudos to Andrea Wyner), including wonderful shots of people and the surrounding geography of Toscana.  Finally, Pamela offers her readers an abundance of stories focused on the people of the Tuscan region and reminds us that one cannot speak of food and culture, in any part of the world, without a narrative about men and women.