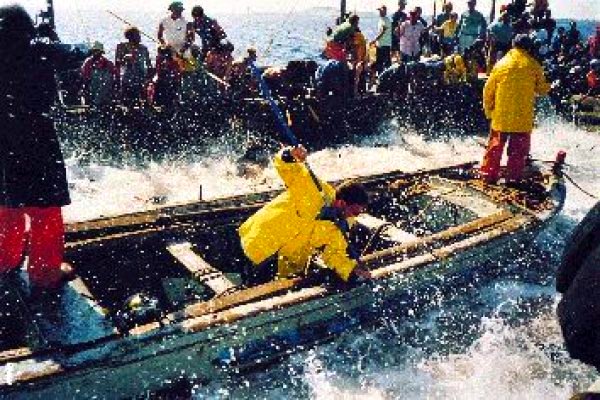 (photo: courtesy of the documentary: “La Mattanza – The Tuna Hunt in Sicily”  * See below for a description of the yearly event)

Eater.com – Eater previews new, 2012, spring cookbooks and “food books.” The preview includes a blurb on The Southern Italian Farmer’s Table: Authentic Recipes and Local Lore from Tuscany to Sicily by Matthew Scialabba and Melissa Pellegrino.  We reviewed Matt and Melissa’s first bookand it was fabulous.
NY Times Science – the headline for this article reads, “Pasta Inspires Scientists to Use Their Noodle” and it’s about a bunch of math wizards who think about pasta in the scientific image.
Del Post presents Tuna Massacre – with an intense tribal beat the chef Hideo Kuribara from New York restaurant Ushiwakamaru breaks down a whole tuna.  Leave it to the New York food scene to dramatize the act, but I’d rather see this performed off the coast of Sicilia by a dark haired Italian.
A Cook Blog – if you don’t know about this blog you should, written by an artist and expert cook, drop it in your RSS feed.  The highlighted post is about gnocchi and the writer’s first trip to Roma.
Esquire Food and Drink – we’ve recently discovered the Manhattan cocktail after receiving a few fancy bottles of Rye Whiskey for the holidays and let me tell you it rivals some of the best Italian based aperitifs on the planet.  Our favorite type of Manhattan is mixed with Carpano Antica red vermouth, Bullet Rye Whiskey, and a dash of Angostura bitters (no preserved cherries but we do add a dash of cherry liqueur)
New York Magazine – “cook don’t dine” is one of my favorite food mantras; that is to say, always aim to make your own, from scratch, food at home and avoid restaurants.  With the aforementioned said, this is a interesting story on one waiter’s experience at Per Se.
* La Mattanza – The Tuna Hunt in Sicily – summary from the 2000 documentary
“Every year between April and May enormous swarms of tuna pass by the Sicilian coast. The fishermen of Favignana prepare for their biggest catch in an appropriate way. Under the direction of the experienced “Capo Rais,” they build the biggest underwater trap in the world, the “tonnara,” from which there is no escape. More than 100 fishermen work round the clock for months on the complicated trap 40 kilometers long. It has to work properly when the big moment comes. The Mattanza is a battle for life and death for the fish, and even for the fishermen themselves. Convoys of tourists from many countries come to witness this spectacle of death from the first row of boats. 90% of the tuna catch on Favignana goes to Tokyo as fresh fish. Japanese chefs come to Favignana to select the best fish. The rest is processed for the Italian market in cans. Nature conservationists are not heard on Favignana, since this is a matter of survival for the fishermen and their families.”